I've been having a break from LOTRO for the last few months because I've been addicted to World of Warcraft: Legion and Path of Exile: Atlas of Worlds. I know Update 19 came out with a new zone, North Ithilien, and Myndariel is looking forward to visiting there but she still needs to get to level 105.

However, I finally got fed up with Windows 10 on my laptop. So I copied all my important data to an external hard drive and completely replaced Windows 10 with Linux Mint 17.3.

After getting it set up so I could continue my work, I decided to have another try at getting my favourite games to work as well. I have previously tried to get LOTRO to work in Ubuntu on another computer by following several guides and forum posts, but with no success. Path of Exile (PoE) and World of Warcraft (WoW) installed easily in Linux Mint with PlayOnLinux, and finally I got LOTRO working too - just in time for server maintenance!


There are lots of guides out there on installing LOTRO in Linux - some say use PyLOTRO, or Windows Steam via Wine, or straight Wine, or Crossover or PlayOnLinux. There are also confusing lists of libraries that are recommended as necessary to make it work. Some of these guides may be out of date, but also different methods may work for different people or different computer set-ups.

Note: Wine is a program that lets you run Windows programs in Linux. There are lots of different versions, with some designed to work with specific programs, while others are called "staging" versions which include bug fixes or experimental features not available in the stable versions.

Here's what worked for me:


2. [Install PlayOnLinux from the Software Manager if not already available.] Open PlayOnLinux.

3. To check what Wine versions you have available, select the Tools menu and click on Manage Wine versions. The left side of the pop-up window will show the available versions and the right side shows installed versions. I found version 1.9.18-staging worked for several games including LOTRO, so to install it, select it from the list on the left side and then click the little > button in the middle of the window.


5. PlayOnLinux informs you that they cannot guarantee the application you are installing will work. Click Next. Select "Install a program in a new virtual drive" and click Next.

7. It then asks what would you like to do before installation. This is where we get to configure Wine and install any extra libraries needed. Every time I tried installing LOTRO with extra libraries it didn't work, so I decided not to install any libraries at this stage. You can change Wine settings or add extra libraries later if necessary (select the game from the PlayOnLinux window and click Configure). Select the options relating to Wine then click Next.

8. It will ask you which version of Wine to use. Select the version that we installed earlier. Then it says it is creating the virtual drive and opens a Wine configuration panel.

9. In the Applications tab, set the Windows Version to Windows XP or Windows 7. *Update: I initially set up LOTRO using Windows XP, but have changed Wine to use Windows 7 and it works fine too.*

I left the Libraries alone so there were no existing overrides listed.

In the Graphics tab, make sure "Allow the window manager to control the window" is ticked. This lets LOTRO change the window according to your in-game settings. I've seen some people recommend choosing the "emulate a virtual desktop" and matching it to your screen resolution, but this didn't work for me - I ended up with the LOTRO client running in a window even though I had set it to run as fullscreen and the bottom of the client was getting cut off so I couldn't click on some buttons (like the Continue or Exit buttons during the character creation process). Associated with this, ticking "Automatically capture the mouse in full-screen windows" caused my mouse to get stuck within the boundaries of the client screen so I couldn't click to close the program. I used another computer and found out that Alt+F2 opens a terminal and typing "xkill" then clicking the window to be closed will terminate the (misbehaving) program. So I don't recommend capturing the mouse. As for "Allow the window manager to decorate the windows" - this seemed to put a plain blue background behind the client when it was in windowed mode. Optional.

None of the other tabs should need modifications, but maybe check the Audio tab and confirm the sound is working. If it's not working, maybe try installing or adjusting Pavucontrol (PulseAudio Volume Control) and/or Gnome-alsamixer (ALSA sound mixer for Gnome).

When you're finished with the Wine configuration, click Apply then OK.

10.  Next it asks you for the installer. Click the Browse button and locate the lotrolive.exe file downloaded earlier then click Next. This will start the installer. Note that the installer installs necessary libraries such as DirectX 9 as part of this process. Let it install files according to the default installation so they go into your Wine virtual drive. Agree to the terms and conditions.

At the end of the setup it offers you the chance to "Launch The Lord of the Rings Online". Deselect this, then press Finish.

11. Return to the PlayOnLinux manual installation wizard and it asks you to create a shortcut. Select TurbineLauncher.exe then click Next. It then asks you for a name for the shortcut - I chose "LOTRO" rather than the default "TurbineLauncher" that appeared. Click Next. It asks if you want to make another shortcut - select "I don't want to make another shortcut" then click Next.

12. The PlayOnLinux manual installation wizard should have closed and you should now have a shortcut to LOTRO on the desktop.

Now you can either (I tested both these methods and now have LOTRO working on a laptop and a desktop PC both running Linux Mint 17.3):

- click the shortcut on the desktop to launch the client (or Run from the PlayOnLinux window), install the Akamai service then download the ~ 16GB game,

- or if you have a working version of the game, you can merge the full The Lord of the Rings Online folder (shown below as having 85 items) with The Lord of the Rings Online folder created by the lotrolive.exe installer (shown below as having 30 items) in the virtual drive to save some time and internet bandwidth. If it brings up a pop-up window regarding individual files with the same name, mark the box "Apply this action to all files" and click Skip to keep the existing files from the installer. Once the folder merge is complete, click the shortcut on the desktop or the Run button in the PlayOnLinux window. There may be some additional files to download to get the game up-to-date.

Here's the path to the folder if you called your virtual drive "lotro": [home]/PlayOnLinux's virtual drives/lotro/drive_c/Program Files/Turbine/The Lord of the Rings Online.


Performance-wise, the frame rate is lower than in Windows but from what I understand, that is to be expected with games running through Wine. I noticed a similar decrease in FPS with WoW and PoE. I could probably decrease the graphics quality a bit and perhaps tweak some other settings to try and optimise performance a bit better, but at least it is playable.

By the way, screenshots, user preferences (e.g. keymapping) and plugins are stored in [home]/Documents/The Lord of The Rings Online.

I hope this helps some people who want to play LOTRO in Linux. I'm very much a noob - I've tried Linux many times but had problems and couldn't find a solution so gave up and went back to Windows. Linux Mint does seem to be more user-friendly though so here's hoping I can stick with it this time.

And maybe I'll even play Myndariel some more. She really should catch up with the Epic Quests and fully explore Gondor before Mordor is fully released.
Posted by Galaedria at 9:28 pm

Email ThisBlogThis!Share to TwitterShare to FacebookShare to Pinterest
Labels: linux 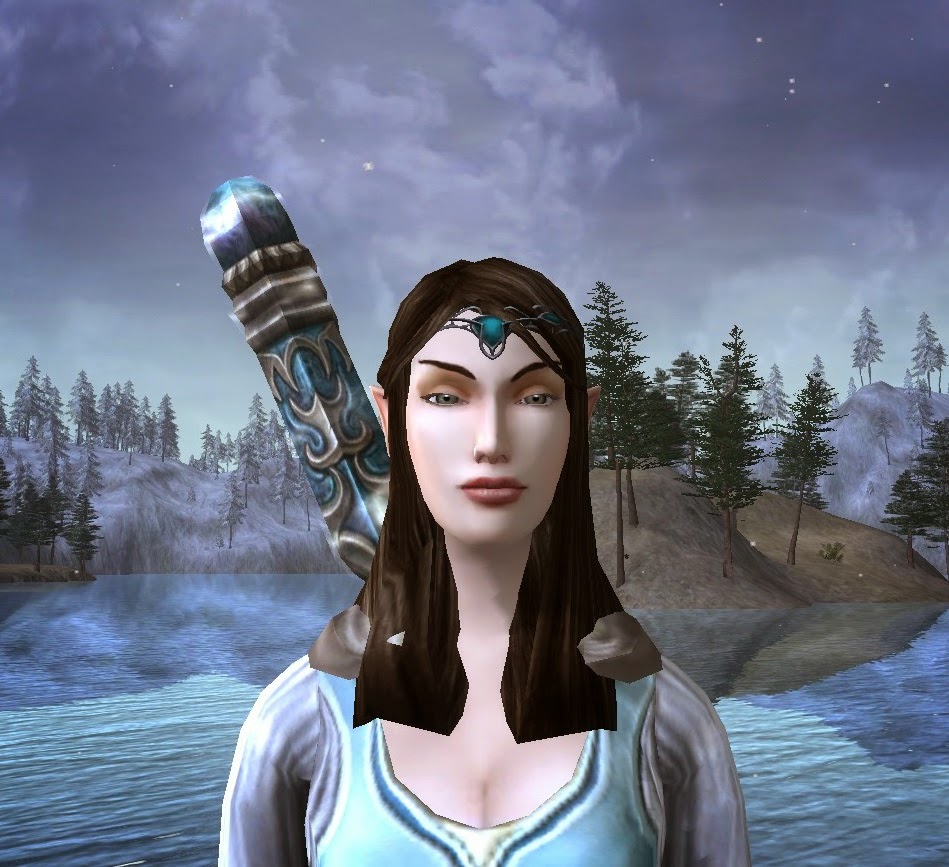 Lore-master, tinker, explorer of Middle Earth. My main heroine in Lord of the Rings Online.